The Beardmore-Geraldton Gold Belt is the fourth most with prolific gold producing region between Ontario and Quebec with a historical production of over 4.1 million ounces.

Argonauts Gold’s development of the Magino mine property confirms that the Beardmore-Geraldton Gold Belt has the potential to return to its vibrant producing past.

As reported in a Department of Mines report, dated 1928, authored by Geo. B. Langford and titled, Geology of the Beardmore-Nezah Gold Area, Thunder Bay District”, prospectors were establishing mining claims in the area prior to 1907 or 1908, but interest at that time was focused on iron ore prospects. “Apart from the above, the only surveyed lines in the area are Beatty’s C.P.R. rail line, run in 1870: the east boundary of the Nippon Forest Reserve, run in 1916: the railway: and several picket lines run by the Beardmore Gold Mines, to aid locating and prospecting various groups of claims.

The first reported discovery of gold in the Beardmore-Nezah area came about when A.G. Burrows, while making a traverse of the Canadian National Railway in 1916, sampled a vein which he found in a railway cut one mile west of Jellicoe and found it to contain $4.00 in gold (price of gold at time in 1916 was $18.99). But it was not until 1925 when the finding of a large gold bearing quartz vein was found south of the railway, that a gold rush took place. 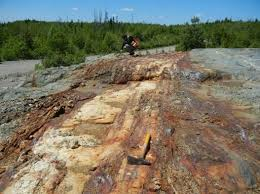